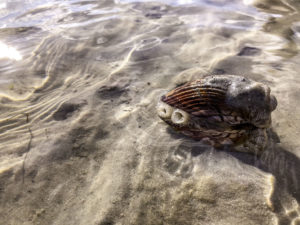 Over a week ago or so,  my family and I decided to take a mini getaway to Fort Myers Beach to spend the week having fun together. We were so happy the weather was so nice, filled with sunny days and blue skies. Not to mention, that the waters were also very tropical and beautiful too, and with marine life coming so close to the shore.

One morning, my son and I woke up early, so we decided to take a walk by the beach. As we were walking along the seashore, I saw this young man walking with a video camera and a tripod, straight towards the water. It caught my attention because it looked interesting, I thought maybe he had seen something. 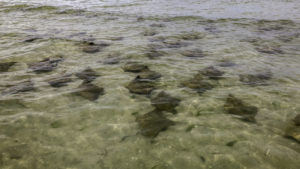 Photography, videos, and taking pictures has always been one of my favorite hobbies, so I got curious to know what he was going to film. I approached him, and he was very nice. He told me he was doing a segment about stingrays, and that earlier in the day, he has interviewed an expert that works with the marine life to learn more about stingrays.  He explained what he has learned and one of the things was shuffling in the water, called the “stingray shuffle”, which actually is a safety measure used to help protect yourself from making sure that you’re not stepping on a stingray when getting in the water. I shared with him that I took a video of the stingrays the day before, and I actually got in the water and was able to film the stingrays swimming very close. He was amazed and found it incredible because that was exactly what he needed. He told me that he was choosing a few people from the crowd to be featured in his segment, to talk about the stingrays and their experience in seeing them, and he then asked me if I’d like to be a part of it. I told that I would love to and that it sounded very cool. Then I asked him what was the video for, and he told me that he was Joe Putrelo from NBC2 News.

I felt so honored. I thought it was extremely cool, in how just one morning of walking at the beach turned into me being interviewed on my experience of seeing the stingrays so closely. It definitely made my day 🙂 It was really cool to have my video featured in the segment, as well as me being able to talk about how it was like to be there and see the stingrays so closely. It was a really nice experience that I’ll never forget. My wife and kids thought it was awesome too, they watched the video and were like “Papi, you’re on TV!!” Haha, it was a cute moment, especially during Father’s Day week, definitely made it even more memorable. A huge thanks to Joe Putrelo from NBC2 News for having me featured in this segment. 🙂

Click the here to check out Joe Putrelo’s article and for the video of the segment of stingrays:

Updated: January 2020.
General ezfunding-realty.com strives to ensure that its services are accessible to people with disabilities. ezfunding-realty.com has invested a significant amount of resources to help ensure that its website is made easier to use and more accessible for people with disabilities, with the strong belief that every person has the right to live with dignity, equality, comfort and independence.

Disclaimer ezfunding-realty.com continues its efforts to constantly improve the accessibility of its site and services in the belief that it is our collective moral obligation to allow seamless, accessible and unhindered use also for those of us with disabilities.

Despite our efforts to make all pages and content on ezfunding-realty.com fully accessible, some content may not have yet been fully adapted to the strictest accessibility standards. This may be a result of not having found or identified the most appropriate technological solution.

Here For You If you are experiencing difficulty with any content on ezfunding-realty.com or require assistance with any part of our site, please contact us during normal business hours as detailed below and we will be happy to assist.

Contact Us If you wish to report an accessibility issue, have any questions or need assistance, please contact ezfunding-realty.com Customer Support as follows: